How easy it is for one to slide into the almost universal habit of comparing himself to others! As a child one compares his achievements with the performance of his peers. As his environment broadens, he accepts other superior or inferior concepts of comparison. When formal education is completed, he enters a world in which his success or failure is constantly measured in its relationship to the accomplishments of associates and co-workers.

This concept of human comparison must at some time be seen to be wrong and be corrected. If one feels himself superior to others, he will eventually be faced with a situation which is beyond his exalted opinion of his personal accomplishments. If he feels himself inferior, either as an individual or as a member of a certain family, nation, or race, he must some day awaken from this falsity to a scientific understanding of his true worth.

Send a comment to the editors
NEXT IN THIS ISSUE
Article
"What are you doing for it?" 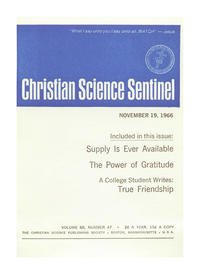