During the past several years I...

During the past several years I have been working on a number of space projects connected with earth satellite, lunar, and interplanetary missions. Throughout this period the understanding of Christian Science has helped me to solve technical engineering problems and those of human relations. For example, while working as part of a team, I have been particularly concerned with setting up the technical specifications which enable an electronic computer to steer a launch rocket into the correct orbit.

While preparing to launch our first satellite, our team was under considerable pressure not to make any mistakes, since the reputation of the company's guidance system would be at stake. Humanly speaking, the probability of failure seemed very high—a new and extremely complex electromechanical system was being tried out. In fact, several attempts by other organizations to place a satellite in a similar orbit had ended in failure, due to human errors.

Send a comment to the editors
NEXT IN THIS ISSUE
Testimony of Healing
I write this testimony with great... 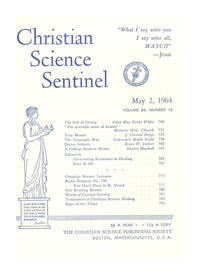