The twentieth century is an era in which the least has become the greatest. That which eye cannot perceive or fingers grasp is said to hold within itself potentials beyond ordinary ken. Atomic energy, resulting from nuclear fission, is now considered the generating source of immense power.

But nearly two thousand years ago Christ Jesus, the man of Galilee, demonstrated energy which has not been equaled by even the most superlative modern accomplishment. By what material power does a living man stand forth where a dead body lay? Has chemistry yet restored withered hands or, in a moment, wiped out some dread disease? 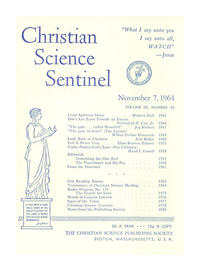