[The above is substantially the text of the program released for broadcast the weekend of September 21—23 in the radio series, "The Bible Speaks to You," heard internationally over more than 800 stations. This is one of the weekly programs produced by the Christian Science Committee on Publication, 107 Falmouth Street, Boston 15, Massachusetts.]

RADIO PROGRAM No. 25 - Should Religion Heal?—Part I

[This is the first of a special group of four programs on the subject, "Should Religion Heal?"]

HOST: Some time ago Louis Cassels, a well-known columnist on religious affairs, wrote that "a strong revival of interest in spiritual healing is underway in many Christian denominations." He went on to say: "Skepticism and embarrassment about this long-neglected phase of the church's traditional ministry is on the wane. More and more churchmen are swinging around to the belief that miraculous cures do occur... and that modern Christians should take a new look at the whole subject."

More recently, some major church groups have issued reports written by special committees set up to investigate Christian healing. These reports have been very conservative in many ways, but let me quote some striking statements contained in two of them. First, the 1960 report of The United Presbyterian Church in the United States of America, "Today as never before in the modern period we see that Christ is relevant to the whole area of sickness and health." And this from the 1958 report of the Church of England: "Fullness of health depends primarily upon a right relationship with God." 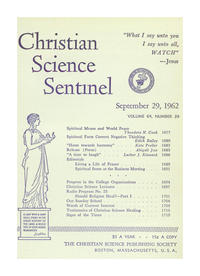