"A rule in Christian Science"

When one observes the elaborate military preparations going on in the world (and he probably knows of only a small part of such preparations), he marvels at the reluctance of humanity to exert a greater spiritual effort to wage war against materialism, the belief in finite matter—the very opposite of infinite Spirit, God. The failure of Christians in general to utilize to the full the powers of Christianity in this higher warfare has brought the world to its present precarious pass.

Christianity as Christ Jesus demonstrated it and as Mary Baker Eddy explains it in its Science calls for an all-out effort to put off fundamental materialism with every ignorant, fearful, or sinful belief it includes. This warfare begins within individual thought and from there must extend to all humanity. It requires the giving up of the false self that embodies and often cherishes materialism. In other words, it requires self-abnegation. Mrs. Eddy writes in "Science and Health with Key to the Scriptures" (p. 568), "Self-abnegation, by which we lay down all for Truth, or Christ, in our warfare against error, is a rule in Christian Science." 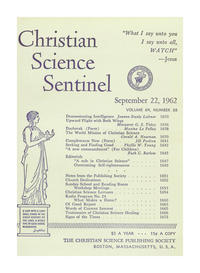