[The above is substantially the text of the program released for broadcast the weekend of July 20–22 in the radio series, "The Bible Speaks to You," heard internationally over more than 800 stations. This is one of the weekly programs produced by the Christian Science Committee on Publication, 107 Falmouth Street, Boston 15, Massachusetts.]

RADIO PROGRAM No. 16 - The True Hunger and Thirst

HOST: We've been hearing a lot lately about "compulsive" habits. We hear of compulsive gambling and compulsive drinking, and other kinds of compulsive behavior too. A large number of individuals have reached the point where they feel they can't get along without tranquilizers or stimulants, sleeping pills or some other kind of drug. Alcoholism now ranks as the third most serious health problem, while an estimated forty thousand people in the United States alone are considered to be incurably addicted to dope.

Specialists in human behavior have long felt that these enslaving habits are merely symptoms of a more deep-seated condition, such as a profound yearning for something which the individual feels is lacking in his life. 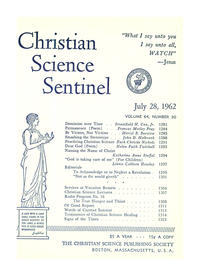