During the First World War, I...

During the First World War, I flew with a squadron of the Royal Flying Corps on long-distance intelligence missions. A small open airplane was used, and we flew at what was then considered a great height. No oxygen was carried. I did carry with me, however, a Bible and a Vest Pocket Edition of "Science and Health with Key to the Scriptures" by Mary Baker Eddy. I read them before and after each flight.

There were a few instances during the five months of this flying when my life was saved though reliance on Christian Science. On returning to the United States I desired to mention my gratitude at a Wednesday testimony meeting in a branch Church of Christ, Scientist. However, I was intensely afraid to speak in public. Through prayer I overcame the fear sufficiently to voice a few appropriate words at a meeting. The healing of fear was more complete than I had realized at the time, for shortly afterward I accepted an assignment to give public lectures at the request of the board of education in a large city. I was able to speak without notes and with full freedom.

Send a comment to the editors
NEXT IN THIS ISSUE
Testimony of Healing
Over thirty years ago I was suffering... 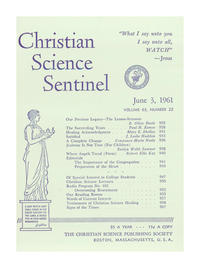