Christian Science came into my life forty-four years ago. Shortly before this I had been in a sanatorium because both lungs were tubercular. Having spent some time there without any improvement, I asked to be allowed to go home. After I had returned to my home, another doctor was called. He told us that there was not anything he could do for me and that I could not possibly live more than six months. I was confined to my bed most of the time.

One day shortly after this a woman who lived in the neighborhood came to see me. She explained Christian Science to me and said I could be healed. 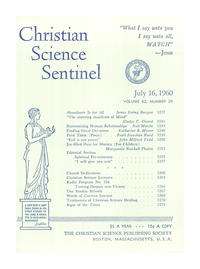