One of the many blessings which Christian Science has brought to humanity is the understanding that men need not fear old age. On page 244 of her textbook, "Science and Health with Key to the Scriptures," Mary Baker Eddy states categorically that "man in Science is neither young nor old." Since the only place where the man of God's creating can be is "in Science," where he experiences neither youth nor age, it is clear that man can never grow old. This is a fact which every student of Christian Science should ponder and gratefully accept, although he recognizes humbly that as yet he has glimpsed and demonstrated it only in infinitesimal degree. It should be pondered by those whom the world calls young as well as by those of mature years. Then, when confronted by the heedlessness and immaturity believed to belong to youth or by the apparent decrepitude of old age, with the understanding of true being one can deny false traits seen in himself, in friends, and in all the people around him.

On page 248 of Science and Health Mrs. Eddy shows that mankind need not suffer the cruel debilitation of old age. Under the beautiful heading "Love's endowment" she states: "Men and women of riper years and larger lessons ought to ripen into health and immortality, instead of lapsing into darkness or gloom. Immortal Mind feeds the body with supernal freshness and fairness, supplying it with beautiful images of thought and destroying the woes of sense which each day brings to a nearer tomb." Here the glorious fact is stated that it is not man who is each day nearing the tomb, but the woes of sense. It is important to realize that it is immortal Mind, not the so-called mortal mind, which feeds the body with freshness and fairness. Mortal mind thinking, until it is denied as unreal and erased from consciousness, outlines on the body nothing which has either the freshness or the fairness of reality. The promise is for men and women not only of riper years but of larger lessons—lessons often learned only by bitter struggles as the claims of temperament and the false sense of selfhood submit to the divine power. 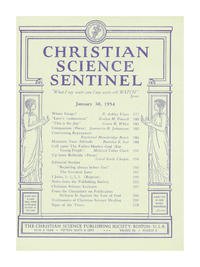