Victory in the Wilderness

The account of Jesus' baptism and ensuing wilderness experience, as presented in the last few verses of the third chapter of Matthew's Gospel and the first eleven verses of the succeeding chapter, is of vital importance to the Christian Scientist. Jesus' baptism was attended by an impartation of the Word which flooded consciousness with the glory and recognition of spiritual being. The Biblical account goes on to indicate that, assured of man's spiritual sonship, Jesus was led to repair to the wilderness, and that there, after he had "fasted forty days and forty nights,... the tempter came to him."

At this point we do well to consult the Glossary in "Science and Health with Key to the Scriptures" by Mary Baker Eddy. In the definition of the word "day," as Scripturally employed, we find the following (p. 584): "The objects of time and sense disappear in the illumination of spiritual understanding, and Mind measures time according to the good that is unfolded." Definitions are also given there of the words "night" and "wilderness," all of which indicate that Jesus' forty days in the wilderness may represent a period not so much of time as of spiritual unfoldment, during which the inspiration gained at the time of his baptism was allowed to establish itself in consciousness. Thus had the children of Israel, some twelve centuries before, sojourned in the wilderness for forty years, learning ever more of divine law until ready to make the promised land their own. 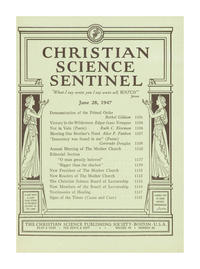