Christ Jesus in one of his parables recited the case of "a man which sowed good seed in his field," but when it came time to harvest his crop his reapers found many weeds among the grain. Upon receiving their report, the householder exclaimed (Matt. 13:28), "An enemy hath done this." Have not most of us had a similar experience at one time or another? Has a good project or some desirable end seemingly been sabotaged by a so-called enemy?

Not long ago a student of Christian Science was awakened in the middle of the night by an attack of illness. Immediately the truth as taught in Christian Science was declared, the illusion was dispelled, and he once more fell asleep. Upon awakening in the morning he found himself completely free from the malady. 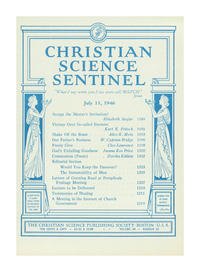