"Behold the Lamb of God"

How often, as day draws toward evening, human thought finds the bright prospect with which it started the day dimmed. Joy seems tired and hope weary. It is not, perhaps, that any great blunder has been made, any great sin committed; it is rather the cumulative effect of many little shortcomings. Here one has said a word that one would rather not have said; there one has done a thing that might have been done a little differently and a little better. Or it may be that some small error of speech or action has been magnified by self-condemnation until it has clouded one's whole thought.

John the Baptist, on seeing Jesus and recognizing the Spirit with which he was endowed, said, "Behold the Lamb of God which taketh away the sin of the world" (John 1:29). And among the last words which Jesus addressed to his followers before his ascension were these (Matt. 28:20): "Lo. I am with you alway, even unto the end of the world." If the Christ-power which inspired John's salutation, and which Jesus promised would be with his followers always, is able to take away the sin of the world, how much more is it able to take away all those little failings that are often the chief source of the ordinary unhappiness of mortals. 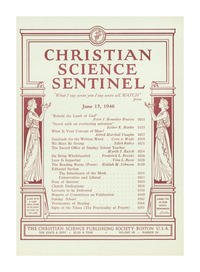