I am very grateful that Christian Science...

I am very grateful that Christian Science has come into my life. From childhood I had never been strong, had always been subject to colds and chills, and had suffered from stomach trouble.

In later years I contracted a lung difficulty. Consumption was supposedly hereditary in our family. The doctors said that I should have a change of climate and be very careful not to catch cold, for that, they said, would put an end to my life. At that time an acquaintance called my attention to Christian Science. I began to read its textbook, Science and Health by Mrs. Eddy. Gradually I became a devoted student. Disease and weakness left me. Since then, many years ago, I have not taken any medicine or sought the help of a doctor.

Send a comment to the editors
NEXT IN THIS ISSUE
Testimony of Healing
About five years ago, while I... 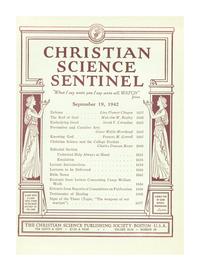