In all ages, men have been laborers. In the fourth chapter of Genesis we read of one Tubalcain, a craftsman and "instructor of every artificer in brass and iron." Throughout the Old and New Testaments there appear records of the activities of smiths, carpenters, metal workers, and artisans in various other crafts and trades.

In the New Testament we read of a worker whose words and example, if consistently hearkened to and conscientiously followed, would solve the present-day problems of labor. In wise and telling words, Christ Jesus admonishes, "Labour not for the meat which perisheth, but for that meat which endureth unto everlasting life, which the Son of man shall give unto you: for him hath God the Father sealed." What thoughts of unselfed love must have come to the Master as he went about his healing work! Here was a workman who urged spiritual-mindedness as the most effective solution of human problems. Speaking of the Christ, which animated Jesus, Mary Baker Eddy, the Discoverer and Founder of Christian Science, states (Miscellaneous Writings, p. 166): "This spiritual idea, or Christ, entered into the minutiæ of the life of the personal Jesus. It made him an honest man, a good carpenter, and a good man, before it could make him the glorified." If the workmen of the world today understood and followed his example, difficulties and differences would be speedily settled. Mrs. Eddy states (The First Church of Christ, Scientist, and Miscellany, p. 149), "The richest blessings are obtained by labor." Let us know that the real man is always about the Father's business, perpetually reflecting God, and that we therefore reflect God in true qualities, such as fairness, justice, truthfulness, righteousness. In the understanding and realization of perfect God and perfect man, the nature of God's children is brought to light, and fear, distrust, and suspicion are removed. Cooperation works out the problems of supply and demand, distribution and apportionment, to mutual satisfaction. Unity, an integral factor in all harmonious relationships, is spiritual. 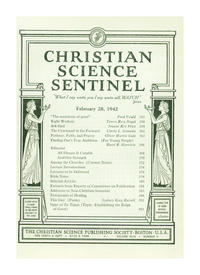