Christian Science affords the way to freedom from the...

Christian Science affords the way to freedom from the effects of ignorance. Webster's dictionary defines "ignorance" as "Want of knowledge"; and it gives the definition of "testimony" as "a solemn declaration or affirmation made to establish some fact."

One day I became suddenly very ill with what appeared to be appendicitis, and remained in bed several months under the care of physicians, getting continually worse. I did not know how to free myself from this difficulty, and was finally informed that nothing more could be done for me. Recognizing not only that apparently my days were numbered, but also that material ways and means could not cure, I turned unreservedly to Christian Science for help, and secured the services of a Christian Science practitioner. Within a comparatively short time I returned to my office. I realized that my suffering had been the result of ignorance of God on my part. 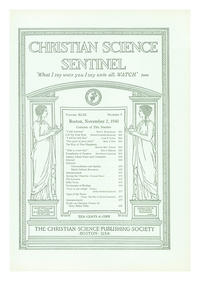