When I was about ten years of age a relative visited us,...

When I was about ten years of age a relative visited us, bringing a religious faith new to us all, which included healing. Her offer to heal my mother was rejected, but her ideas of healing made a lasting impression on my young thought. I never met her again, but many years later I learned that she had been taught by Mrs. Eddy in 1884.

As I grew into young womanhood, I passed through a period of intense mental anguish, and was bereft of home, friends, and health. I found myself in a state of general ill-health with various chronic ailments. Operations were resorted to, bringing some physical relief but no peace of mind. Then a fall from a horse resulted in a spinal injury and paralysis of the lower limbs. I was sent east to a hospital, where I remained for five months. Numerous physicians and surgeons passed on the case, and finally I was told that I should never walk again, and had but a few months to live. However, I refused to be totally disheartened, and determined to repeat the Lord's Prayer at least once a day, and to think only good thoughts. 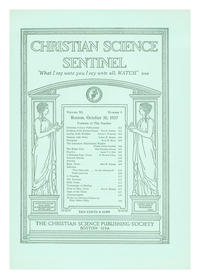