In times of stress or doubt, when mortals seem to be struggling with some form of sickness or sin, possibly accompanied by lack and limitation, thought instinctively turns for help to a higher source than materiality offers. It may be that one has heretofore denied any belief in God or in the availability of prayer to aid him. Probably ever sufferer, at some time in his life, has silently or audibly offered up some form of prayer. Oftentimes prayer has been expressed in just a humble desire for freedom from any of the myriad forms of evil. Inevitably, if poured forth from a hungry heart yearning for righteousness, this form of prayer receives a direct answer. To the one whose thought has been purged of self-will sufficiently to declare earnestly, as did Jesus, "Not my will, but thine, be done," there comes a sweet and satisfying answer, the calm assurance of the presence and power of divine Love.

One whose condition had been pronounced incurable found herself one day sending forth an earnest silent appeal for help and guidance. Desperately in need of help, hour after hour she silently lifted her thought to that higher power which, she instinctively felt, existed. This prayer received a definite answer when, on that same day, in spite of the added suffering such an effort involved, she obeyed an irresistible impulse to accompany a member of her family to the near-by public library. Exhausted and weary from the sense of pain which followed this exertion, she dropped into a chair at one of the many tables in the public reading room. With closed eyes she sat there for several minutes feeling the utter futility of the struggle to endure such suffering, and wondering, at the same time, how she could possibly walk the distance of three short blocks back to her home. 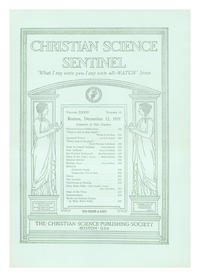