Ralph W. Still, Committee on Publication for the State of Texas,—Fort Worth

Christian Scientists quite well understand and appreciate that disease appears to be very real and obdurate to the material, human sense of things; but as disease is recognized by them as error, and not as a part or factor of true being, and as every form of disease is being healed through this understanding, the correctness of their position is demonstrated. Christian Scientists view disease experiences in much the same way as the mathematician views errors in his computations. He does not hold these errors to be real, but regards them as something to be eliminated by a correct application of mathematical truth. Similarly, the musician does not regard discords as a component part of the science of music; and he eliminates them by a correct understanding and application of the laws of underlying harmony. Hence it is seen how, through Christian Science, discords of material sense are eliminated from human experience; that is, by knowing the truth, and by understanding and demonstrating that the realities of being are ever harmonious.

The mental origin and nature of disease is now freely admitted by many competent medical men, no less an authority than Sir William Osler holding that the foundation of the treatment of disease is to be found in the realm of the mental. So the attitude of Christian Scientists should not be considered dangerous to the community. Indeed, their scrupulous observance of quarantine and contagion regulations is acknowledged by public health officials the country over.

Send a comment to the editors
NEXT IN THIS ISSUE
Article
An editorial in your issue of recent date contained the... 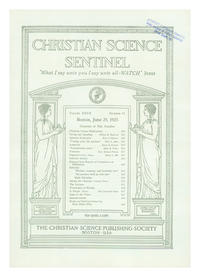