ONE day a student of Christian Science, on board a fast train that was speeding across the country, was joyously engaged in gleaning more of the realization that man is spiritual, when the word "collision" came suddenly to her thought. She was impelled to go to work at once to destroy fear of danger, and her eyes turned to "Science and Health with Key to the Scriptures" by Mary Baker Eddy, which lay open on her lap. She saw these words (p. 581): "Ark. Safety; the idea, or reflection, of Truth, proved to be as immortal as its Principle." The truth expressed in these words brought a sense of security and protection, and the recognition that man is always safe in the presence of God. Almost simultaneous with this realization the train came to a sudden stop in mid-country, and then began to go backward. On looking back, the traveler saw an automobile on the embankment by the track, a short distance away; and on reaching the scene, she learned that the four occupants of the car were unharmed, as was the car itself. Although the locomotive engineer and others believed there had been a collision, what had really occurred was that the automoblie had been suddenly turned in the direction the train was running and was stopped by the embankment near the track, standing in its usual upright position, and without harm to any one.

The incident serves to illustrate the importance of prompt obedience. Christ Jesus taught, "Agree with thine adversary quickly." His life-work exemplified his teaching. In the temptation in the wilderness he met the suggestions of evil with a ready and decisive answer, so complete that the devil—error—left him, "and, behold, angels came and ministered unto him." Mrs. Eddy also taught her followers promptness and mental alertness. On page 514 of Science and Health she says: "In the figurative transmission from the divine thought to the human, diligence, promptness, and perseverance are likened to 'the cattle upon a thousand hills.' They carry the baggage of stern resolve, and keep pace with highest purpose." 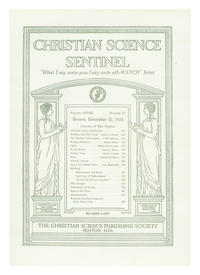