Your correspondent, when referring to a statement made...

Peter B. Biggins, Committee on Publication for the Province of Alberta, Canada,—Medicine Hat

Your correspondent, when referring to a statement made in my recent letter to you, has inserted into the passage he quotes words which I did not use. My letter said, "Christian Science spiritualizes thought; it reveals true spiritual existence." In purporting to quote these words your correspondent adds to the latter sentence the words, "of human beings after death." That is not the thought expressed in my letter. Christian Science reveals spiritual existence here and now as well as hereafter, in accordance with the teaching of the Apostle John, "Beloved, now are we the sons of God." It does not follow that, because one has faith in immortality, he must also believe in spiritualism. Christian Science teaches clearly the fact of man's immortality, and at the same time contradicts the theory of spiritualism. Christian Science does not depend upon so-called spirits to prove the fact of man's immortality. Christian Science makes clear the Scriptural teaching that God is eternal. It also makes clear the fact that man is made in God's likeness. Therefore it is plain that the real spiritual man is immortal. Writing on this subject in the Christian Science textbook, "Science and Health with Key to the Scriptures" (p. 81), Mrs. Eddy says: "Man in the likeness of God as revealed in Science cannot help being immortal. ... In Science, man's immortality depends upon that of God, good, and follows as a necessary consequence of the immortality of good."

Send a comment to the editors
NEXT IN THIS ISSUE
Article
Dr. Woodburn's interesting address on "Spiritual Healing,"... 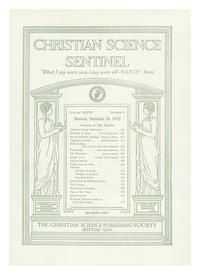