Because Christian Science is the Science of Christianity or the exact, provable knowledge of God and His laws, which was declared plainly and demonstrated fully by Christ Jesus, it is the one and only means whereby all human needs can be met. That may seem to be a strong and startling statement; but it is evident from the Scriptures that, during his three years' ministry among men, Christ Jesus met every human need, whether it presented itself as a need of health, of food, of intelligence, of comfort and peace, of salvation from sin, or of deliverance from storm. He was the Way-shower; and his words plainly indicate that he expected mankind to be the Way-goers or followers of him in all that he thought, said, and demonstrated. The Master came, as he said, to do the will of the Father, who, according to James, is the Giver of "every good gift and every perfect gift," and "with whom is no variableness, neither shadow of turning." It is thus apparent that it is the unchanging will of God that every need is to be met in the manner and by the spiritual means prescribed and practiced by Christ Jesus.

Despite the fact that Jesus was, demonstrably, the most practical and spiritually successful of men, yet strict obedience to his commands and the application of his precepts to business problems and conditions have for centuries, and until quite recently, been regarded as so impractical that any one who was an advocate thereof was called a dreamer or a mere theorist. Christian Science is leavening the world-thought regarding business, and the needs in connection therewith, just as it is leavening, changing, uplifting, the world-thought regarding religion and therapeutics; so that, now, consistent Christian Scientists are generally regarded as dependable, practical business people; reliable, respected religionists; and successful healers of the sick. 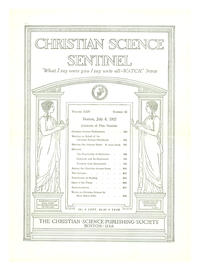