Music , humanly interpreted, is one of the most emotional concepts of mortal mind. By those who have investigated the belief it is supposed that sound is a more emotional stimulus than some of the other sense impressions. For this reason the student of Christian Science needs to be especially alert in accepting only the truth about sound and in rejecting a mere human sense impression as arousing false emotion. Because human psychology is counterfeit of the understanding of the divine Mind, psychological reasoning as to the pleasure of music must be replaced by the truth. Divine Principle is the sole power able to move man, and divine Principle is continually stimulating calm, right action. Thus the real music produces not human feelings, either of joy or sadness, but is inseparable from unfolding wholeness of living.

Any earthly sound is of no value in itself. If one desires to hear mere sounds, either separately or in combinations, for themselves, as a sensuous and emotional experience, one is not comprehending the divine Mind's infinity of expression, which is the true sound, or music. Thus Mrs. Eddy states in the Manual of The Mother Church (p. 61): "The music in The Mother Church shall not be operatic, but of an appropriate religious character and of a recognized standard of musical excellence; it shall be played in a dignified and suitable manner." It is the divine Mind's idea of spiritual order that counts, not simply a human sense of arranged sound. 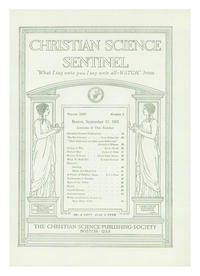