[Dorothy Canfield on Disarmament, in The Woman Citizen]

Cast your eyes back, let us say, to the period of the feudal system; which was to stay forever, so thought the rulers of those times. We of to-day are used to the arguments of "impractical," "against human nature," "utterly impossible," which our rulers use against the idea of international disarmament. The same sort of thing was advanced with the same passion of conviction at the notion that public safety could be secured except by a baron in a castle to whom everybody in the region owed implicit obedience. Nor did the feudal system fall in a day, or a year. Slowly, as it encountered increasing intelligence and cooperation in mankind, it crumbled away to nothingness and oblivion. In the same way, if we all work hard for general intelligence and wider cooperation everywhere, the hideous idea of huge standing armies will crumble away to nothingness. But we must not be discouraged by the slowness of the process. 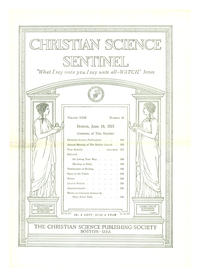