Thinking over a recent Lesson-Sermon, one sentence...

Thinking over a recent Lesson-Sermon, one sentence seemed to accuse me of being neither obedient to the Bible, the Manual, or the Hymnal: "Freely ye have received, freely give." I have often expressed my gratitude for our periodicals, but the question came, Am I proving it, when they are among our broadest channels of service, and open to me at all times, to send out a few words of encouragement to some one in need?

All I am and all I have I know I owe to Christian Science. In our family of four, we have had numerous healings, among them that of ivy poisoning, of smallpox, and of skin diseases; and a bone in the foot, which was either dislocated or broken, was healed in two or three days. Late one Saturday afternoon, I heard one of the children crying, and on going to the door I found a neighbor's dog had bitten the child in the face. I called a practitioner, over the long-distance telephone; the next morning the child went with me to Sunday school, the swelling and discoloration having all disappeared, and the scars were healing over. Monday morning she was happy as usual, and out at play. She often played around where the dog was, and has not shown the least fear of him or of any other dog since. Two long scars remained on her cheek for a year or more, but they, too, have entirely vanished.

Send a comment to the editors
NEXT IN THIS ISSUE
Testimony of Healing
I am most grateful for a wonderful healing I had of an ingrowing... 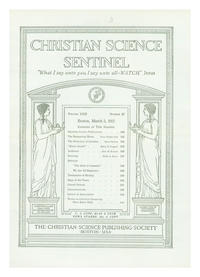