It seems to be a fair assumption that the different reasons...

It seems to be a fair assumption that the different reasons offered by the political doctors are presented, "not for their intrinsic value," but solely for the purpose of justifying, if they can, their campaign for a federal department of medicine which would enthrone, with autocratic powers, the allopathic (or vaccinating) school of medicine. This school already controls the provincial and municipal health departments of the country. Such is the strength of this control on this province that last session the people were unable to secure the incorporation of a "conscience clause" (as exists in the vaccination act of the United Kingdom) in the revised compulsory vaccination act. Then, too, the revised Ontario health act, also done under the auspices of the allopathic hierarchy, stipulates that the municipal health officers must be "legally qualified medical practitioners" instead of sanitary engineers or doctors of public health, as in British cities. The inadequate and unsatisfactory public health service in Ontario municipalities may fairly be ascribed to the fact that the provincial health department, instead of being under the direction of sanitary engineers, is in the hands of the allopathic school of medicine, which is seeking to establish itself in the Dominion cabinet.

While the Citizen has been outspoken in its condemnation of the efforts of the political doctors of the allopathic school to secure control of the public health activities of the Dominion, and while the Citizen will continue to speak frankly but fairly in opposition to this campaign, it should be made clear to all that the same outspoken opposition would be offered to any other school of medicine attempting the same thing. At the same time the Citizen desires to proclaim its admiration and respect for the conscientious and honorable general practitioners of all schools of medicine or healing whose work as such in contradistinction to public health work is invaluable, courageous, and in many case noble in the extreme. The Citizen's quarrel is with the attempt of the political doctors of one particular school of medicine to secure control of the public health activities of the federal government. As the school which is now aggressively making the attempt includes in its treatment compulsory vaccination, this paper's opposition in defense of the people's liberty in the matter of medical treatment will be persistent. 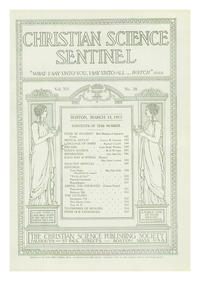