The great idea of Jesus was the kingdom of God. He believed so firmly, so unwaveringly, in the ultimate triumph of righteousness and peace, that his vision makes the dreams of the world's greatest optimists fade into darkness by comparison. He recognized the dangers which he faced, the forces which he had to meet, the tragical mistakes and disloyalties of his followers, but without a moment's hesitation he launched his idea because he believed in "men and religion." He believed in the potency of his idea because he knew what was in man, and had a steady and sublime faith in his strength and nobility and heroism when freed from the terrible obsession of sin. 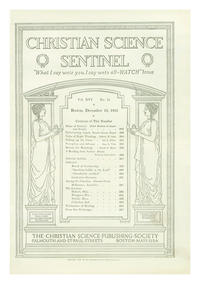