Christian Science does not deny that pain and suffering...

Christian Science does not deny that pain and suffering exist in the human consciousness. Their seeming reality can be destroyed, however, by the understanding of the supremacy of Spirit,—that in God's kingdom sin, sickness, and death do not exist. Christian Science endorses the Bible teaching, "Whatsoever a man soweth that shall he also reap;" and "if we say that we have no sin, we deceive ourselves, and the truth is not in us." Christian Science opens the sinner's eyes to the enormity of his sin, and shows him how to free himself from the bondage of an unreal master. Mrs. Eddy declares that the sinner must forsake his sin in order to comply with the demands of this Science. 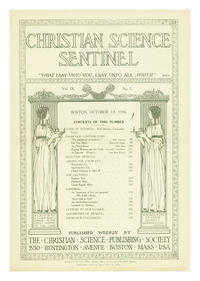