I have received so many blessings from Christian Science...

I have received so many blessings from Christian Science that my heart overflows with thankfulness. It found me in a dark world of suffering, and after trying all the material remedies I had any faith in, I turned to it, thinking it could do me no harm if it did me no good. "Science and Health with Key to the Scriptures" by Mrs. Eddy, was given me, and I became interested at once. I have found so many blessings in it, that it is more than all the world to me. I find it good to help me in my work, good to teach to the children, for they learn to love one another and that God is Love. To mothers I would say that I have found Christian Science to be a great help with children.

When I was about sixteen my father passed away, and this set me to thinking. I did not know anything of the Scriptures only what I learned at Sunday School or at church, but that was enough to show me that Jesus healed the sick and raised the dead. I thought if this were ever done it could be done again. I never had any desire to be a church member, for I first wanted to understand some of these things. My health was then fairly good, but when I married and became the mother of two children, my health failed, and as time passed on I grew worse. I took many kinds of medicine, had different doctors, but my suffering grew worse. We spent nearly all we made for doctors and medicine, and to me it seemed that I suffered everything common to mothers. Another baby came to our home and by health became so poor that part of the time I was unable to wait on myself or the child. I ate so little for fear of distress that I became very thin, and had to be careful so as not to take cold, even in hot weather. In this condition Christian Science found me, and twelve years have elapsed since I began its study. My health is so improved that I can eat anything I wish. I was not instantly healed, for I have come into this spiritual uplifting little by little, but the goodness and blessings I have received are many. I am very thankful to our Leader, Mrs. Eddy, and to God for the good that I and my family have received from Christian Science. In so far as I can realize God's allness I am living in a new world.

Send a comment to the editors
NEXT IN THIS ISSUE
Testimony of Healing
Before me is a New Year's card, sent by a dear friend,... 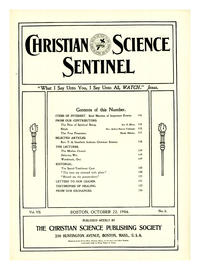