To the Editor :— Recent expressions in your columns adverse to Christian Science lead me to ask the privilege of making a statement or two regarding the subject, in the hope of correcting some of the erroneous impressions that exist regarding its teaching and practice, as it is believed it is these false conceptions of what Christian Science is supposed to be, and not what it is, that calls forth criticism. Under editorial heading, "Slaughter of the Innocents," the terms recently applied to Christian Scientists are unjust in the extreme, and are no more warranted or founded on fact than the present false impressions of the Chinese regarding the work of the Christian missionaries.

Christian Science numbers among its adherents many thousands of honest and law-abiding citizens, and these people, being possessed of at least a moderate amount of intelligence and common sense, would not place dependence for health and happiness for themselves and families upon Christian Science, had they not proven for themselves its true worth. 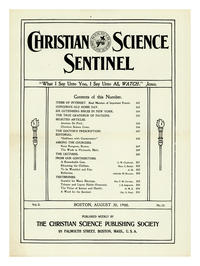