The Queen and the Suffragists

By simply greeting the advocates of a wider influence of woman in politics, this Queen, who has ruled successfully for sixty-three years over hundreds of millions of subjects, and during those years has been a loving wife and the mother of a large family, answers the stock arguments about the incompatibility of public life and politics with what is called "woman's sphere." Who shall dare decide what any person's sphere is? Such attempt is an interference with the individualism which is the basis of all personal rights. If men and women are to be born into castes from which they can never escape, we might all just as well have been born in India. It is this personal independence which is most peculiarly an American characteristic. It lies at the base of forceful life and character. Most of the old-fashioned arguments against woman suffrage assume that those who were born women must be automations, the sport of man's caprice so long as they live. The new argument that woman should be too womanly to engage in politics is somewhat better. Queen Victoria answers it by her presence and approval at a woman's suffrage tea-table, which she had arranged to do its advocates honor.

Here again is a lesson for American women, who will be more sovereign than the men are so soon as they have the right to vote. It is often objected that if women had the ballot they would be too fanatical and radical to make wise use of it, but the example of Queen Victoria is refutation of this. No male monarch ever ruled with such justice and impartiality as she. The great influence she has had has sobered rather than elated her. It has made her feel that deep responsibility to God which makes men and women thoughtful and conservative of the good, and more tolerant even of the evil, lest in destroying it the good should also perish. 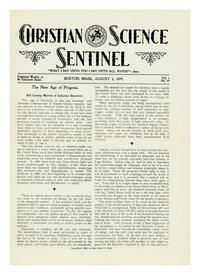