To meet her faithful followers face to face and to speak a few words of encouragement to them, the Rev. Mary Baker Eddy attended the annual meeting of The First Church of Christ, Scientist, in Boston, Tuesday afternoon, June 6. The meeting was held in Tremont Temple, in order to permit as many of the members as possible to attend, the Mother Church being much too small for such a meeting. This was the largest meeting in the history of the Church, fully three thousand persons being present.

At the last of the four Communion services held at the Mother Church on Sunday, June 4, S. J. Hanna stated that it would be best for those who had arranged to go to Concord, N. H., the home of Mrs. Eddy, to defer their visit until after Wednesday. It was then taken as a hint that some opportunity might be afforded the visiting Christian Scientists of seeing their Leader in Boston. 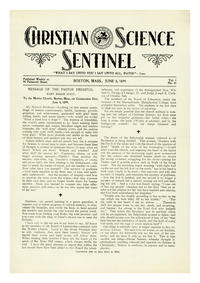