Theologians object to the theology of Christian Science, physicians to its medicine; whereas, it offers an unfailing medicine for the healing of sin, and a scientific theology which heals every ill to which flesh is heir. Its theology and medicine have one principle.

What do we mean by the healing of sin? Even that change of thought by which selfishness, sensuality, dishonesty, impurity, self-righteousness, etc., are rooted out of human character—not without the suffering which inevitably follows the awakening to a knowledge of one's self, but lasting only while the sin lasts—to be replaced by those positive elements of character, for which all Christians are striving, such as unselfishness, spiritual-mindedness (which St. Paul says is life, contrasting this condition of thought with that carnal-mindedness which is death), practical honesty in all one's dealings, purity of thought and life, and that true meekness which is the crown of manhood.

Send a comment to the editors
NEXT IN THIS ISSUE
Article
Not Mrs. Judge Ewing 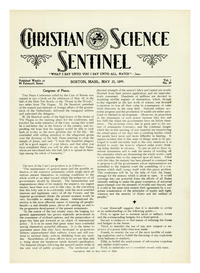