TESTIMONY OF A FARMER

My occupation is that of a farmer. My age is fifty-one years. For five years I had been a great sufferer from what the physicians—and I had consulted the best in Waldo and Penobscot Counties, this state—said was a leaking heart. For three years my case was pronounced a hopeless one. My regular physician told me that there was no power on earth that could even help me. I could do no work of any kind, had become very much emaciated, and when the town officers of South Newburg, Maine, on account of my health, exempted me from paying a poll-tax, I began to think I had to die. I made all arrangements for my funeral, engaging the minister and pall-bearers, and did not think I would live a month.

Wednesday morning, May 12, 1897, I went with my father to Bangor, as I supposed for the last time, to draw from the bank what money I had there and to arrange my earthly affairs. While in Bangor, I stepped into an eating-house to lunch and rest. I was very nearly prostrated. With both arms on the table and using both hands, I could barely raise my cup to my mouth. My extremely nervous condition attracted the attention of the proprietor, who proved to be a gentleman I had known fifteen years before, but whom I had not seen in all those years. In our conversation I told him of my condition, and he remarked that if I would go with him he would take me to a man that he thought could cure me. 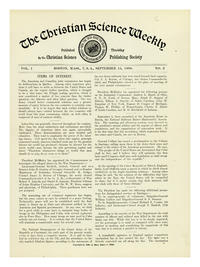