Three years ago I had my attention called to the subject of Christian Science through the healing of my wife, who "had suffered many things of many physicians." At the hotel where we were boarding a Christian Scientist had presented the subject to us, but we were not quite ready to give up our false gods; our extremity was not great enough.

One night my wife was taken with an attack so severe that she seemed not likely to survive the night. I went to the above-mentioned Scientist and she gave her absent treatment. The improvement was immediate; she had not been able for months to sleep without an opiate, but she slept naturally all that night. She had been living on beef-tea, milk, and seltzer water, then she was enabled to eat anything. She had been taking seven kinds of medicine; these she threw away, and within six weeks was completely healed. Diseases that had been life-long were canceled; and, greatest of all, her eyes were opened to see the Christ, Truth. It was very difficult for me to believe that she was really healed; and still more difficult to believe that she had been healed by Christian Science. 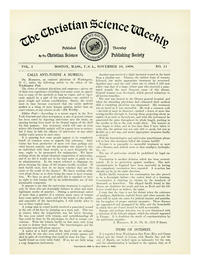