Christian Science has done a great deal for me

Christian Science has done a great deal for me. But one instance, which happened about three years ago, I will speak of in particular.

I had business down at Hennesy, O. T., and on Friday morning, passing from the hotel over to the main street, I fell to the sidewalk as if I had been shot, with a terrible pain in my right hip. I believe they called it sciatic rheumatism. I had to be helped back to the hotel. I knew a little about Christian Science and tried to realize the Truth for myself, but had to get some crutches. Saturday morning came and I was no better, but the thought of going home on crutches seemed awful to me, because my wife was a Christian Science healer, and I knew how people would think and talk; so, instead of coming home in daylight, I waited and took the night train, arriving early Sunday morning. My wife realized the Truth for me, and Monday morning I was as well as ever, and have had no more use for the crutches since that time.

Send a comment to the editors
NEXT IN THIS ISSUE
Testimony of Healing
Now at the close of our summer vacation, comes to me... 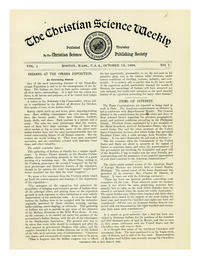