When I quit blaming

The Golden Rule is the antidote to blame, anger, and revenge.

An experience from a couple of years ago showed me how great it feels to love those who have done me wrong and to be free of blaming others. But I had to be willing to do this before it could happen.

I had moved from California to New York and arranged to have my belongings shipped by a local company. Several weeks passed, but the shipment didn’t arrive, and each time I called the company, I was told a different story. When I finally had the information I needed to track the delivery, I discovered that my shipment had been sitting at the company in California the entire time. It had just been picked up by the freight service to come to New York, nearly a month after I was told that it was already en route by truck. 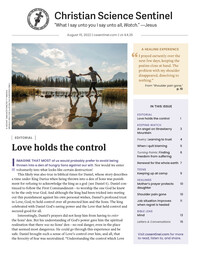