For many years I had accepted a physical limitation that had become a way of life for me. When I was in fifth grade, my teacher told my mother to get me glasses. She said, “He can’t read the blackboard.” Mom got me glasses, but I wore them only when I had to.

At the age of sixteen I went to the state motor vehicle department to get my driver’s license and was told that my license would be restricted and that I would be required to wear glasses when driving. So, I put on glasses to drive.

Many years later as a senior driver, I went back to renew my license, and I did not pass the eye test. As a result, I could not renew my license and was told to get stronger lenses before coming back for retesting. But the optometrist told me I already had the strongest lenses available. There was nothing more he could do for me.

Discouraged, I thought I might buy an electric bike and give up driving. Instead, I finally turned to God for help. As a lifelong Christian Scientist, I had always found this a natural thing to do, but there had been resistance to praying about this particular issue. Now it seemed to be the only remedy. I opened my Bible to the twenty-third Psalm, which begins, “The Lord is my shepherd; I shall not want,” and realized that this was a promise that I could rely on my divine Shepherd for help. We can never want for anything when we do.

I realized, too, that I felt an unnatural reluctance to call upon another Christian Scientist to pray for me, and yet I recognized the need to do this. The name of a Christian Science practitioner came to me, and I called her to ask for metaphysical treatment. I told her of my failure to qualify for a driver’s license. In a most convincing way, she told me I would have my driver’s license. Her response lit a fire in me. Obviously, she did not accept any thought of failure or hopelessness but instead sent me down a path of trusting God’s help. She exuded a conviction of my irrevocable and perfect spiritual being. I could feel this conviction.

Approximately two weeks later, I reappeared at the motor vehicle department and was tested again. I failed again and was told to come back at a later date. My faith in God continued, and the practitioner assured me of God’s power and presence. When I finally received the renewal, it contained the familiar requirement “must wear corrective lenses.”

Shortly after receipt of the renewed license, I had a complete healing of my eyesight. At first, I did not comprehend that my eyesight was perfect. I went about my affairs without noticing that I was seeing everything. Later, while sitting at the beach, I was asked by a companion if I could read a sign about fishing rules posted on a pier. I quickly read it out loud to him without my glasses, and he was amazed that I could read it correctly from such a distance.

After more than forty years of needing glasses to see distant items clearly, I now could read street signs, license plates, and warning signs, and even see the faces of people walking toward me long before getting close to them. Because I could no longer see through my old glasses, I threw them all into the trash with such joy. I returned to the motor vehicle department and had my eyes tested again. For the first time in my life, I was given a driver’s license without any restrictions.

Looking back on this healing, I realized the importance of this statement by Mary Baker Eddy in the Christian Science textbook: “Sight, hearing, all the spiritual senses of man, are eternal. They cannot be lost. Their reality and immortality are in Spirit and understanding, not in matter,—hence their permanence” (Science and Health with Key to the Scriptures, p. 486).

Keeping in sight the perfection and permanence of man’s God-given spiritual senses brings healing, for which I am very grateful. As it says in Hymn No. 93 in the Christian Science Hymnal, “the joy of perfect work” is the prize (William P. McKenzie). 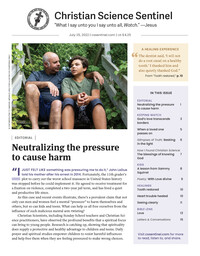