The first man Adam was made a living soul; the last Adam was made a quickening spirit. . . . The first man is of the earth, earthy: the second man is the Lord from heaven. As is the earthy, such are they also that are earthy: and as is the heavenly, such are they also that are heavenly. And as we have borne the image of the earthy, we shall also bear the image of the heavenly.

“Living soul” quotes wording about the creation of Adam from dust, the essence of matter (see Genesis 2:7, citation 4). “Quickening spirit” describes God’s life-giving nature and activity, demonstrated by Christ Jesus. “The image of the heavenly” further portrays this Christly character, which is understandable by every believer. 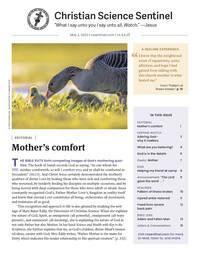