A few years after college, when I had been practicing Christian Science for only a few months, I was a counselor on a horse ranch, which also cared for a group of 21 emotionally disturbed teenagers. It had been raining for a week; the kids in my cabin had been acting up; and I was suffering from a bad cold.

The pediatrician who owned the ranch was due to visit the next day, and I was worried about him seeing me so obviously ill. He was well aware of my interest in Christian Science and knew that it had resulted in both of the other counselors and several of the kids attending church and Sunday School at a nearby Christian Science Society. 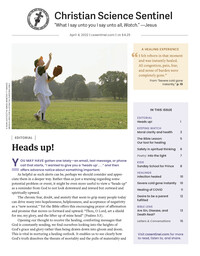