I had a strong desire to visit the church

In December 1994 I obtained a teaching post in the Bahamas at a time when the standard of living in my country, Jamaica, had fallen drastically. As I had often suffered from bouts of influenza, before moving to my new home, I stocked up on medication because I didn’t know whether that medication would be available where I was going.

Before I left, I remember glimpsing a branch Church of Christ, Scientist, tucked away in a secluded spot of the city. I had heard about the church, but always in a negative light.

Of great interest to me, however, was the church I had attended for 16 years, as I was preparing to enter the ministry of that church. But something happened to me on my way from the Bahamian airport to my hotel. I saw churches of several denominations along the way and felt a strong desire to visit the Christian Science church rather than my own.

That Sunday, I and the person who was reading aloud from the desk were the only attendees. I later learned that the Church of Christ, Scientist, has no ordained ministers; instead, each branch elects two Readers from its membership, and during the Sunday service they read aloud a Bible Lesson-Sermon published in the Christian Science Quarterly. One reads select passages from the Bible, the other from the Christian Science textbook, Science and Health with Key to the Scriptures, written by Mary Baker Eddy, the Founder of the Church. Although that particular Sunday there was only one Reader, she was quick to assure me that I shouldn’t be concerned that only two of us were in attendance.

After the service she gave me a copy of Science and Health and invited me to the Wednesday evening testimony meeting. Even though I had to go to work the next day, I stayed up late reading the book. I just couldn’t put it down; I found what I had been searching for all my life: the truth about God and His creation, including man.

What really arrested my attention was what it said about the two accounts of creation in the book of Genesis in the Bible—the spiritual and the material, only one of which could be true. I was so moved by what I was learning that I got rid of all of my medication. That was over 26 years ago, and I haven’t taken any medication since. I have relied totally on prayer for healing influenza and many other ailments. I also noticed that the flu came less regularly. I have come to understand, as Mrs. Eddy explains in Science and Health, that “the medicine of Science is divine Mind; . . .” (p. 104)—Mind being a synonym for God.

Christian Science is an exact Science, and we can each prove its teachings for ourselves. It wasn’t long after I began reading the textbook that I had such a proof. One day I lost a large sum of money. I had just returned home from cashing my paycheck at the bank when I put my hand into my pocket and found it empty. I was terrified, for I knew my wife and children back home in Jamaica were depending on me for support, and I also had my own rent to pay. Turning to my understanding of God, I began to know that nothing is lost in divine Mind, and as I was truly living in this Mind, I couldn’t lose anything either.

Returning to the place where I had taken the bus home, I approached the bus conductor and asked him if anybody had reported finding a sum of money. He replied in the negative, and from his reaction I surmised that my case was hopeless. Nevertheless, I kept affirming what I had been learning about God and His goodness—and, looking down at the steps leading into the bus, I saw my billfold. Many people had boarded and exited the bus but had failed to see it. When I opened it, I found that the contents were intact. There is no question in my mind that God had answered my prayer.

I thank God for the Christ, Truth, as exemplified by Christ Jesus, and for the Discoverer of Christian Science, Mrs. Eddy, who gave us the correct, spiritual interpretation of Scripture that meets our every need here and now. 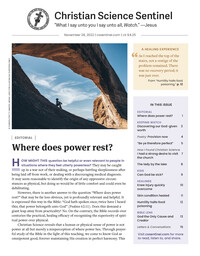