Many years ago, I served as an Army chaplain assigned to an engineer battalion in Vietnam. At one point, our equipment began to disappear. Measures were taken to stop the thefts, but they continued. It was ominous. There was a feeling of an unseen evil force over which we had no control. Our commander faced the prospect of being relieved of his command, and I was on my way to comfort him when I realized I needed to do something else first. I went to my office and shut the door.

That day I began sustained periods of communing with God. I wanted to feel the presence of good that could not be invaded by evil. After the second or third day, it all came together in my mind. Several pieces of information, none of which had previously seemed connected to our problem, took on new meaning. I knew what was happening, who was involved, and where the situation was headed. The equipment was being sold for money to start a drug ring. I focused my praying on this new insight, and then shared my intuition with the commander. He acted on it, and the thefts stopped. 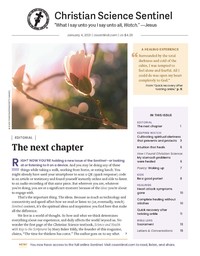