Many years ago a small growth appeared near one of my eyes. I didn’t pay much attention to it, but over the years it slowly grew. As it became more noticeable, I became self-conscious about it. Then, when I was having an eye exam for new glasses, the optometrist told me I should have it removed.

This was a wake-up call, and having had countless healings through Christian Science over the years, I decided to deal with the situation through prayer. I gained inspiration from my prayers but kept having doubtful thoughts, such as: “If this would just get smaller, then I would know I was being healed.” Then, more recently, a friend asked me quite bluntly, referring to the growth, “When are you going to do something about that?” 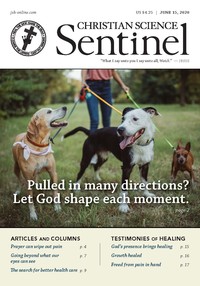