‘This photo popped up on my phone …’

Q: This photo popped up on my phone the other day. Of a guy’s, you know … thing. I don’t even know him and I definitely did not want to see that. But now I can’t get the image out of my head. Help.

Todd Herzer: As the father of daughters, unfortunately I know this kind of situation all too well. And I hope you have an adult in your life you can confide in about what you’ve experienced—even if you don’t have any evidence that it happened, because it was a Snapchat that’s already disappeared. Nothing about a guy doing that is right or OK.

Deborah Huebsch: It’s also understandable that it isn’t easy to get the image out of your head. I know what that’s like, because I had an experience in my twenties of witnessing something disturbing that was hard to shake.

It was a Wednesday night, and I was at a Christian Science testimony meeting at church, when a woman fell down half a flight of stairs, landing on the stone floor below. When she finally came back to church after a month, she was using crutches and moving slowly.

For weeks afterward, I’d had trouble with the image of her fall flashing through my thoughts quite a number of times. It wasn’t like I wanted to keep seeing that image, but I also hadn’t done a whole lot to try and deal with it—other than to think about how terrible it was.

But this time, when I saw her slowly making her way down the aisle of the church and the picture of the fall flashed again, I said to myself, “No. Not in church. This doesn’t belong here. I don’t accept it as true.”

What that brief prayer meant to me was that an image of suffering or pain couldn’t have any place where God, good, is All—which of course is everywhere, not just in church. No matter how impressive that image seemed to be, I didn’t have to accept it as a reality, because God’s total goodness excludes anything and everything bad.

I know I wasn’t the only one praying during that service, and when church was over, the woman left her crutches in the pew and walked out. She’d been healed. And so had I, because that jarring image never came back to me again.

Todd: That reminds me of Mary Baker Eddy’s statement in Science and Health with Key to the Scriptures about “dark images of mortal thought, which flee before the light of Truth” (p. 418).

You could say that what popped up on your phone was one of the ultimate examples of “dark images of mortal thought.” But you can see from that passage how we don’t get left in that place. What does it say those images do? They “flee before the light of Truth.” Truth is God, so you could say that no matter what the dark image is—and we all certainly face those dark images in various forms—the answer is always to turn our thoughts to God. The solution is to let God flood our thoughts with light. That’s what Deborah did when she prayed: She said no to the darkness and turned toward the light. And light naturally excludes darkness.

Deborah: That light could come in any number of ways. It could be God’s reassurance that you’re safe, that you’re pure. It could be a feeling of peace. But you’ll always know whatever you need to know, because that’s what God does for us.

Todd: For me, it’s helpful to remember that we aren’t powerless or helpless. Even in situations where it seems like we’ve been the victim, we still have power—or “dominion” as the Bible calls it—over our own thoughts. We have the authority from God to reject anything that isn’t good.

Deborah: That’s right. No matter what pictures try to enter our thoughts, a firm, “No. Not acceptable, not allowable, because God really is All,” is really all that’s needed. That kind of prayer packs a punch, because it has God’s power behind it. And that divine all-power is enough to rescue us from whatever dark images may pop up on our phones—or in our lives. 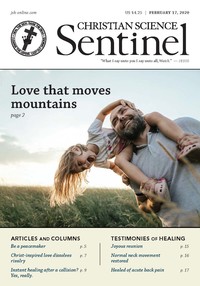