No more gestational diabetes and no aftereffects

About four years ago, while I was pregnant with our second child, I was diagnosed with gestational diabetes. When I received the diagnosis from the doctor’s office over the phone, I felt sure it was a mistake.

The doctor required a second, more in-depth, test, before and during which I prayed until I became very aware that I was the expressed image of God. In Mary Baker Eddy’s book Science and Health with Key to the Scriptures, the author says, “As a drop of water is one with the ocean, a ray of light one with the sun, even so God and man, Father and son, are one in being” (p. 361).

Send a comment to the editors
NEXT IN THIS ISSUE
Image and Inspiration
'Millions of unprejudiced minds—simple seekers ...' 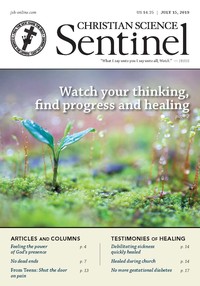