How can I deal with relationship problems?

Q:  How can I deal with relationship problems—friends, family, romance?

A: Dealing with relationship problems has often felt stressful to me, especially when it has seemed like something needed to be said or done, but I couldn’t figure out what that was. One time in particular my thoughts were consumed with confusion and distress. I kept swinging between a self-righteous monologue about how right I was, and a “self-wrongness” monologue about how the problem was all my fault.

I could see no human actions that would bring resolution, which was probably good because it turned me to prayer. I’ve learned a lot about prayer, or turning to God for spiritual answers, through my study of Christian Science, and prayer has helped me in lots of relationship situations over the years. But I guess in this case I was so befuddled by the issues that it took utter helplessness for me to remember to turn to God.

I tried to pray by saying, “Here, God. You take this issue.” My prayer was sincere enough, but if you look at it carefully, maybe you can see the flaw in it: I was still holding on to the concept of having an identity separate from God, and then asking God to solve my relationship problem. That doesn’t exactly fit with what I’ve learned in Christian Science about the nature of God. God is All, our very Life. We don’t have our own independent lives that we need to bring God into, or problems that we need God to fix. Problems are fixed and healing happens when we surrender to God’s loving government of His creation as the only fact of our existence.

I prayed, “Help me to know how to yield this relationship to Your control, God.”

Not surprisingly, the worries and chatter in my head wouldn’t stop. So I prayed again: “Help me to know how to yield this relationship to Your control, God.” What I heard back was immediate: “Don’t yield the issue to Me; yield to Me.” By this, God was saying that His nature and government were what I needed to wholeheartedly consider.

Oh, wow! I could see the difference instantly. God can’t take our issues and deal with them, because God knows nothing of problems. It’s the fact that God is All-in-all that’s the only issue, topic, or subject for consideration. When we yield to God as the thing we need to ponder, know, or magnify, then we are actually coming into alignment with our place in Being as the perfect effect of the one perfect cause. Mary Baker Eddy, who wrote the Christian Science textbook, Science and Health with Key to the Scriptures, puts it this way: “For right reasoning there should be but one fact before the thought, namely, spiritual existence” (p. 492). In other words, yield to God as the important thing to understand.

This shift brought an amazing feeling of peace and a release from concern about whether I had any responsibility for straightening out the other person. I was willing to say or do something if I felt clearly impelled by God, but I was no longer obsessed with figuring it out or making it happen. And as it turned out, the relationship righted itself and was back to normal without my saying a word.

The greatest thing about the prayer of yielding is that we can all always do it.

One of my favorite stories in the Bible illustrates this kind of yielding to God. Jacob had a twin brother, Esau, with whom he’d had a huge fight. They hadn’t seen or spoken to each other in years. Finally, Jacob decided he wanted to straighten things out with his brother, but he couldn’t get over the mental agitation and fear about how the reconciliation might go. One night, though, when Jacob was wrestling with these thoughts, an inspiration came to him as an angel message from God, and a switch in thought came too. The Bible says that he saw himself as the face, the reflection, of God, and he also saw his brother as the face of God. And his brother was pleased with him. In other words, he didn’t hang on to the issue of two warring brothers and try to get God to fix it. He yielded to God as the source of his and his brother’s true identity. He yielded to trusting God to govern him as the issue that needed his full attention. And the next day, he and his brother had a sweet reunion (see Genesis, chaps. 27, 32, 33).

The greatest thing about the prayer of yielding is that we can all always do it. It’s like setting a heavy suitcase down. But remember, don’t just yield the suitcase of issues to God; yield to God and your relationship to Him as the issue you need to focus on. In this sacred place of seeing everything and everyone as belonging to God, we find God holding all Her ideas in perfect government, harmony, and peace. And if there’s anything we need to say or do, then we do or say it—not to cause peace, but, like Jacob and Esau, to celebrate the peace that God is always causing. 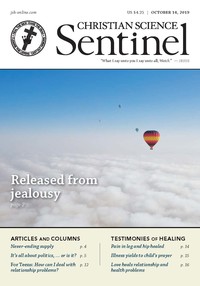