A couple of years ago my wife and I embarked on a grand adventure to Peru. As we were preparing for the trip, we encountered many warnings about travelers getting food poisoning after eating the local food. Having had some experience with food poisoning, I committed to praying about this illness on the way to Peru and throughout our travels.

About a week into the trip, however, I became comfortable with the local cuisine and gradually stopped praying for protection as readily as I had been. Around that time we were making the journey to Machu Picchu, and after eating some new meals along the way, I began to feel unsettled, and became quite ill. At this point it was the night before we were to awake early and see the ruins, but it didn’t appear I was going to be well enough to go. 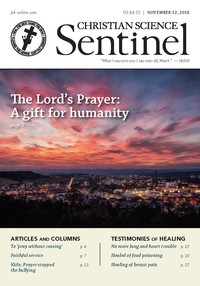