Praying for the Olympic Games

I was sitting on the floor, eyes glued to the TV screen, impressed with the fast and precise movements of gymnasts such as Nadia Comaneci and Olga Korbut. That was the day I watched Comaneci’s performance on the uneven bars that made her the first gymnast to receive a perfect score of 10 during an Olympic gymnastics event. From my home in São Paulo, Brazil, I felt as if I were right there in Montreal in 1976. It was my first encounter with such a worldwide sporting event during my pre-teenage years.

Since that time, the Summer Olympic Games have fascinated me. They teach me lessons about endurance, grace, strength, and the capacity we all have to overcome fear and limitation. Observing the athletes in action helps me understand how true and practical Mary Baker Eddy’s statement is: “The feats of the gymnast prove that latent mental fears are subdued by him. The devotion of thought to an honest achievement makes the achievement possible” (Science and Health with Key to the Scriptures, p. 199). 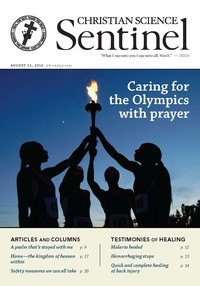