A glimpse of God’s preservation

I had an instantaneous healing one weekend when I was living in France a couple of years ago. One Sunday morning I woke up bright and early to play in a match with the soccer team I had been a part of for several months. Although I was on friendly terms with the girls I was playing with, we were able only to smile and greet each other because we didn’t speak the same language.

Until this time I had only practiced with the team. But the team members asked if I might join them for their last game, and I gladly accepted. I had a fun and hardworking first half, playing in a forward position. During halftime, while sitting with my teammates in a locker room, though, I suddenly felt extremely ill. My stomach and throat became uncomfortable, and I felt as if I might throw up. 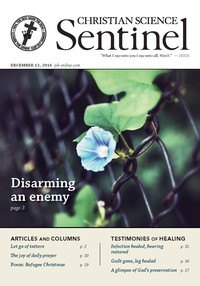