Originally published in The Christian Science Monitor, May 30, 2016.

This election year in my country has stirred me in ways that are not always pleasant. Recently when a friend asked if I would vote for a particular candidate, I was shocked at the force of my negative response to the candidate and also found myself judging the morality and character of the candidate’s supporters. As articles in The Christian Science Monitor have pointed out, this election seems to have had a polarizing effect among Americans and around the world.

Yet, as a Christian Scientist I have found that discord and polarization are not consistent with God’s law of harmony and are not conducive to progress for individuals or society. In fact, Christian Science holds that harmony is God’s natural order. Using “Principle” as a synonym for God, the discoverer of Christian Science, Mary Baker Eddy, writes, “Harmony is produced by its Principle, is controlled by it and abides with it.” She follows this sentence shortly after with: “Harmony in man is as beautiful as in music, and discord is unnatural, unreal” (Science and Health with Key to the Scriptures, p. 304). This friction I was seeing needed to be overcome. 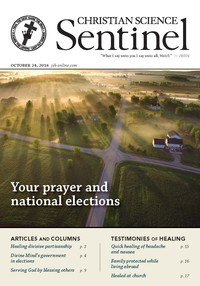