A biblical promise for refugees

Currently the world is experiencing a refugee crisis and a wave of migration that is being described as the largest since World War II. Heartbreaking reports of overloaded boats with migrants fleeing their home countries, as well as overcrowded refugee camps, have been flooding the news.

While the current crisis is particularly severe, migration for economic, political, or religious reasons is nothing new. In fact, many of us can trace our family histories back to the migration of ancestors from one country to another. 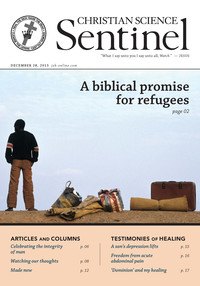